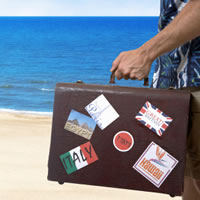 I recently asked my friend and colleague, Ed Wetschler, if he was traveling much these days.

It was a fair question for Ed, who is the Executive Editor of Tripatini and chair of the Northeast Chapter of SATW. But his answer baffled me.

Ed shined a spotlight on something I’ve known since I’ve started in this profession but somehow hadn’t identified.

Let me rewind a bit…to one of my early press trips. I had just arrived on a Caribbean island, in my role as a travel editor at BRIDE’S magazine. I went to change money in the airport and was told, it wasn’t necessary.

I enjoy the VIP comfort of a press trip, but always keep in mind it’s not like traveling on your own.

“You won’t need any cash.” said the public relations representative who was leading our small group around the island. Even though I was just in my early 20s, I had already logged in a great deal of international travel. Part of the travel experience for me was learning about the local currency. In some countries, a 10,000 note might be worth 80 cents while in another, a heavy coin could be worth $10. I loved examining it and I always saved a bit to take home (and still do this).

“What about tips?” I asked.

“The host is taking care of it,” the PR woman replied. “Come on, we have to go now.”

I climbed into the van and as we started rolling through sugarcane fields, I asked for a map. No one had one. Not the PR person, the tourism woman who joined us, nor the driver.

I felt foolish. I should have brought a guidebook.

“You don’t need a map,” the cheery tourism woman replied. “We know how to get there!”

I sat silently—pit in stomach. Where were we though? Which coast? I couldn’t stand not having that orientation, not knowing whether I was going north or south. How does a traveler get from point A to point B?

As we careened through a small village, I asked the PR woman what the name of it was. She, who had visited her client’s property two or three times before, told me she’d have to get back to me.

When we arrived at our hotel, which was literally inches from the water’s edge, we were all handed our keys and told we would reassemble in the lobby for cocktail hour. My room was the honeymoon suite (which I was always given when I traveled). This is some time now, so I don’t recall many of the details, but I do remember thinking that it looked exactly as it did on the ad pages of the magazine I worked for.

At the cocktail hour, I asked what the room rate was.

“You don’t need to know,” said the PR woman. “It’s taken care of and besides…on a honeymoon, who thinks about the price of a room?”

I had the feeling that I didn’t even need to know about the country. As long as I was happy with the hotel room, the service and the transportation to and from the airport, everything was fine.

Now fast-forward to my role as the editor of FarewellTravels.com which is designed to provide a service to readers.

My readers are largely independent travelers, not relying on the guidance of a group leader. The first thing they are likely to do upon arriving in a country, is change money and get a map. From there, they’ll want to figure out the most interesting way to get around and spend their time stopping at any place that strikes their fancy. And as for money, they may want to stay in a beautiful room, but they also want to know how much it cost.

Fortunately, not all public relations people with whom I’ve traveled have been as indifferent to the need for me to orient travelers and to give people a sense of what this costs. Still, as much as I enjoy the VIP comfort of a press trip, I always need to keep in mind, it’s not like traveling on your own. It has its advantages but it also has its drawbacks.

How would you deal with this? Share your press trip experiences!