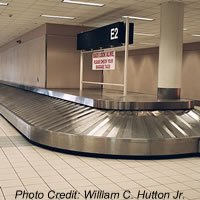 A few weeks ago, someone I was traveling with lost her luggage…

We arrived at our baggage carousel at Heathrow, and within five minutes, two out of three of us had our bags.

We waited and watched the conveyor belt empty out and as it ground to a halt, it became very clear. One bag was not there.

It is this very moment in travel that I think you can learn a great deal about yourself and about others.

Over the years, I have watched in horror as seemingly very sweet fellow travelers turn into raving maniacs when they are the last one standing alongside the empty carousel. I once observed a moments-ago very professional individual weep as if she’d just seen a mass killing. And I’ve been shooed away by the I’m-just-going-to-go-lick-my-wounds traveler who wanted to be left alone to suffer.

As a rite of passage into becoming a travel writer, I think there should be some sort of lost luggage test.

As for the smug travelers who do have their bags happily piled in front of them, more than once I’ve watched travelers team up and insist on abandoning the “victim” of lost luggage. “Can’t we just go on ahead to the hotel?”

I’ve seen the self-righteous, “Well-I-never-check-baggage” type and I’ve seen one schoolmarm point her finger and scold, “Well…you should never have checked it on a connecting flight. What were you thinking?” Travel writers can be so cruel.

Of course, I’ve seen the flip side as well. The accompanying holier-than-thou traveler who insists on being there for the victim, even if it means the entire group has to miss a connecting flight.

I’ve also been the victim of lost luggage countless times myself. It almost always shows up—but twice, far too late for it to be of any use to me.

As a rite of passage into becoming a travel writer, I think there should be some sort of lost luggage test everyone has to go through. If you can’t pass, you really have no business in this business. While losing your “stuff” can be terribly inconvenient (nobody wants to wear corduroy in the Sahara), being able to forge ahead without it allows you to really embrace the travel experience.

The person I mentioned in the opening paragraph of this story actually didn’t lose her luggage. It turns out it was sitting on the floor next to the conveyor belt window, in a huge plastic bag. It had broken open in transit and the airline took care of it.

After quietly accepting the worse-case scenario with dignity and poise, she realized that that sad looking plastic bag was hers. Maybe that’s why it showed up. The airline (Not a plug, but they deserve credit. It was British Airways.) replaced the bag within moments of her reporting it.

As we wheeled our bags out of the airport, I sighed, grateful that I was in the company of true travelers.

How do you handle adversity while traveling? Share your advice!