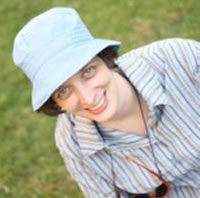 Have you ever wondered what it’s like to travel by container ship?

Meet someone who did.

I must confess that I’ve been a fan of Maria Staal‘s for quite some time.

I first discovered Maria through her blog that chronicles her genealogical research into one of her ancestors (who it appears was a saint), and I recently greatly enjoyed reading her very entertaining book, Time Zones, Containers and Three Square Meals a Day.

I found her story – of traveling by container ship – to be so fascinating that I just had to interview her about her experience and her process of writing about it.

Q. Traveling by container ship is such an unusual thing to do – what inspired you to take such a trip?

I never liked flying very much and when I was planning to return to Australia from Europe in 2000, I thought it would be interesting to try and get there without setting foot in an airplane. I had a choice of going overland via Russia and China, or board a ship and travel the seas.

I wasn’t sure which one to choose or how to organise either trip, but then I came across a travel guide, which mentioned freighter travel. I was immediately intrigued and phoned the number I found in the book, which was of a travel agency that organised journeys on freighter ships.

I booked my ticket six months in advance. My trip would be on a container ship going from Rotterdam in the Netherlands to Fremantle in Western Australia.

Q. Was it your plan to write about it before you booked your trip, or did the book idea come later, after your adventure?

I didn’t plan the book beforehand, but I did keep a very detailed journal during the trip to Australia and consequent journeys on other container ships.

The idea for the book came in 2004 after I had spent a total of nine months at sea on five different container ships. I felt that the uniqueness of the trip would be an interesting topic for a travel book, especially since so many weird things had happened on board.

Q. How did you prepare to write your book, and how long did it take you once you started?

The journals that I kept on the ships turned out to be lifesavers when I prepared to write the book. My last trip on a container ship had been in 2003 and by the time I was ready to write the book it was early 2009.

I read all the journals and highlighted the things I thought interesting enough to add to the book. After this I realised that it would be best to take the trip on my final ship, the Serenity River, as the main story line. To this I added some stories of the other ships using flashbacks.

In the end it took me five months to write the book and two or three to do the editing.

Q. What’s your next book project? Anything you can share with our readers?

At the moment I am working on two new book projects. One is a sequel to the Time Zones book in the form of a bundle with 16 short stories. These are the stories that were left out of the Time Zones book, because they didn’t fit into the timeline or would have made the book too long.

This sequel, More Stories of Time Zones and Containers, is coming out as ebook at the end of April. (Ed. Note: This interview was conducted in early April, publication was delayed for editorial reasons, thus the sequel is now available.)

Another book project I am doing research for is the story of an ancestor of mine who lived in the 9th Century AD and became a saint.

My quest to learn more about him and the time in which he lived, will take me to five or six countries in Western Europe. The resulting book will probably be a travelogue mixed with some interesting titbits of history about my ancestor’s life.

EXCITING NEWS! Maria has generously offered a giveaway – she will randomly choose 3 people from amongst new email subscribers to her blog feed at mariastaal.com between now and the end of June – and each of the 3 winners will receive their choice of one of her books (all three books are available as paperbacks, her two most recent are also available as ebooks).

I hope you’ve enjoyed reading about Maria’s experience of living the adventure of travel by container ship and writing about it – I know I did – and I hope it inspires you as well!

To read more about Maria’s onboard experiences, go check out her guest blog post at one of my favorite travel blogs, ThePlanetD.com.

Have you written a book about your travels? Share your advice!