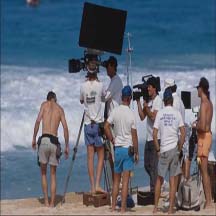 Christine Garvin, a writer for Brave New Traveler, recently wrote the article “Does Hollywood Influence Your Perception Of Religions Worldwide?” She asked readers, “Does learning about other cultures, faiths, and people firsthand make a person less influenced by Hollywood’s interpretation of different religions?” My response was “…it’s a scary thought that people look to Hollywood to enlighten them.”

As a travel writer, it’s a good idea to travel with an open mind and be objective. It’s good to open yourself to new ideas. You don’t have to accept them, but be willing to listen to other perspectives. Expand your horizons and go beyond your current beliefs. You never know, you may learn something new!

Here’s an excerpt from Christine’s article,

“…Why are people so affected by what Hollywood has to say? It seems to be how many people learn about other religions and cultures: “The entertainment industry does a particularly terrible job depicting other countries and cultures…the people who say “why are you taking this so seriously?” have been brainwashed to the point where they don’t see why (making fun of other cultures) is wrong…this has been done so much, that people just overlook it.”

Don’t look to outsiders such as the Hollywood community to influence your views. Do your own research and come to your own conclusions. Remember, you can’t always believe what you hear and read. Try to be a traveler and not a tourist. The difference is that a tourist sees only the facade – that which a [destination/culture/society] wants you to see, whereas a traveler gets to know the destination or culture as it really is, by immersion and education. You can just be a visitor or you can become a student of the world – it’s your choice.

When you write, it’s okay to express an opinion, just be sure that your opinion is based on your own research and experiences. By keeping your writing objective and based on facts and personal experience, you’ll sound more knowledgeable, and your articles will appeal to a broader audience.

Do you have preconceived notions before you visit a foreign country? Do you research your travel destinations before you leave? Does Hollywood or the news influence your beliefs?