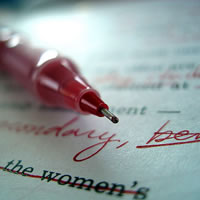 During my first few years of freelance writing, several magazine editors sent my manuscripts back to me, requesting rewrites.

They liked my story ideas but wanted the articles rewritten, more detailed, or presented from a different angle.

Our egos can be stung

These early perceived criticisms of my work stung like a bee. Fortunately, I soon realized this was just my ego reacting. Ego is a powerful thing and I quickly understood that if I wanted to see my articles published in their magazines I would have to put my ego aside. I had to give the editors their rewrites just the way they wanted them.

So, I buckled down to try to understand what the editors were telling me about my writing and what I needed to do to improve it. I made the rewrites my first priority and turned them around within 24 hours.

Once I accepted all this, I forged excellent relationships with my editors.

After a few rewrites, I came to understand that the editor’s comments and feedback were not personal. They were simply aimed at improving the readability of my articles, so the editors could go ahead and publish them. Editors are deeply and personally invested in their magazines, regarding them almost as their children. Not to mention that their jobs depend on producing quality stories month after month. So they want the most polished stories they can get.

I also grudgingly realized that, after the rewrites, my stories read so much better. Bonus! I was learning how to improve my writing from these rewrites. I was growing as a freelance writer.

Once I accepted all this, I forged excellent relationships with my editors. They, in turn, were relieved that I was open to rewriting my stories, when needed. This attitude adjustment on my part placed me in their regular stables of writers. I suddenly found these editors accepting more of my pitches. In one case, an editor accepted an article from me after he had previously rejected it, just because I had his confidence after doing a rewrite. A few editors even sent me new assignments, without me pitching them.

I was gaining momentum. Because I was comfortable with rewrites, I was magically getting more work from more editors.

While I was figuring all this out, I was meeting other freelance travel writers at conferences and workshops. These friends advised me that the worst thing I could do was fight or disagree with editors over editorial changes. They told me, “This will get you removed from their stable of regular writers very quickly“. Editors prefer to work with low maintenance writers, not prima donnas.

Why do writers feel the sting of criticism so badly? We tend to see our writing as an immensely personal extension of our mind. We see our work as a reflection of the very essence of who and what we are, so receiving and accepting feedback on our writing is very hard for us to digest. We’re being confronted by our own lack of perfection.

How can we deal with the ego sting?

Savvy veteran freelance writers learn to develop a thick hide and to accept constructive feedback and criticism, instead of reacting and taking it personally.

When an editor gives you feedback on your writing, requests a rewrite, or edits your articles, it’s not personal. Give the editor whatever he or she wants, immediately. It’s their magazine! They know what their readers like and dislike far better than you do.

About Roy Stevenson 45 Articles
Freelance travel writer Roy Stevenson has had more than 1,000 articles published in 200+ regional, national, and international magazines, newspapers, trade journals, custom publications, specialty magazines, in-flights, on-boards, and online travel magazines. He's considered one of the most prolific travel writers in the U.S.A. His free weekly newsletter for aspiring travel writers is considered one of the most informative e-zines in the travel writing business. (Subscribe here: http://www.pitchtravelwrite.com/pitchtravelwrite-ezine.html) Roy has published seven eBooks on selling and marketing freelance travel articles. (http://www.pitchtravelwrite.com/digital-downloads.html) You can read Roy's full bio and see some samples of his work at his writer's website, www.Roy-Stevenson.com
Website Facebook