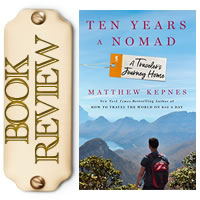 Matt Kepnes (aka Nomadic Matt) has finally remained still long enough to pen a memoir about his many years as a globe-trotter….

… and how he wound up building a blog that inspired hundreds (maybe thousands?) to follow in his footsteps as he followed those whose guides he devoured and who served as his own inspiration.

While I expected his story — appropriately titled Ten Years a Nomad: A Traveler’s Journey Home — to be interesting (the hostels! the beach parties! and yes, the love-on-the-road tales!) what I hadn’t expected was for it to be so engaging, relatable, and so very painfully honest.

For starters, Matt’s words are always an easy and compelling read – his blog faithful already know this – because he speaks the same way in print as he does in person….open, truthful conversation that immediately encourages a reader to slip into the comfortable space of just hanging out with him, laughing at the situations he got himself into, and out of.

Thus his tale — from the beginnings of his latent wanderlust driving his decisions to quit his job, throw on a backpack, and see the world — will have many readers nodding (I certainly did, often throughout the book) …….even if you’ve never done that, I’m sure many you can still relate to how his career dissatisfaction led to such a life-changing undertaking.

One aspect I enjoyed most is that Matt is entirely humble about sharing the lessons he learned from navigating a new path, sometimes learned the hard way. There is no bragging here, just a genuine interest in helping others to avoid the potholes and appreciate the simple things.

I won’t give spoilers but I will tell you that I had a hard time putting the book down, even with limited time to read – it’s not a long book, but it’s definitely an enjoyable one.

Read this or others’ tales of life as a nomad? Share your favorites here!