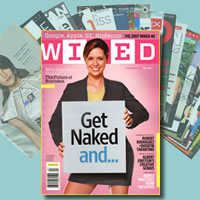 When I was at Conde Nast, my colleagues and I periodically talked about how powerful the words “Free” and “Sex” were.

Those were the two words that sold the most magazines, the two most frequently used words on the covers. However, they were never used together (which, quite frankly, would have drawn even more readers).

Now that we’ve shifted into cyberspace, I’m not convinced these words still have the sex appeal they did pre-digital media. In fact, they certainly don’t for me.

When I see either word used in a tweet, I think spam. I see them as desperate hashtags trying to get attention. Free almost always is not free or involves a contest that requires filling in forms and committing to a life of junk mail. The word sex is used for porn—especially by those inviting tweeps to see it.

So what are the new words? The universally magnetic words? The words that are like catnip for the masses?

Do any of these grab you?

Not one of these work for me. Of course, putting a few together might just do the trick. I’m thinking along the lines of naked…ashton kutcher…chocolate…you get the picture.

What words make you click on a headline or read a story?