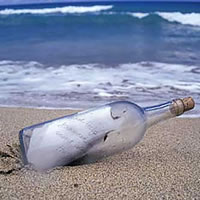 A couple of years ago, I came across a treasure.

At least I think it was a treasure. Unfortunately, its real value I’ll never know.

What I found, while taking a break in my boat (I’m a sculler as well as a travel writer) was a bottle bobbing in the waves. I paddled over to it and saw what looked like milk inside.

But on closer inspection, I realized it wasn’t milk, it was a note, on which I could clearly see the penciled words “Open This.”

Carefully, I scooped it up into my shell and rowed back to the dock.

Once on shore, I painstakingly removed some heavy tape that had been wrapped around the bottle cap, to prevent water from seeping in. But a little water had gotten in and the paper was soggy.

Were these directions to some buried treasure?

I could see what appeared to be elaborate instructions on what to do should someone find this message.

Were these directions to some buried treasure? A cry for help from someone marooned in the Atlantic Ocean?

I’ll never know, because it was virtually impossible to decipher what was written.

We are all so focused on getting our content done and online these days, that few of us really take the time to make sure we’re archiving things the way we should so they’re not only available to us, but maybe our offspring or …down the road, some historians.

A friend of mine wrote the other day and said his back-up drive had crashed and he lost everything. It was the back-up drive. Repeat. The BACK-UP drive.

He had been smart. He had a back-up drive. But because of the crash, not only did he lose years of work, but his work (at least what was on that back-up drive) vanished from history.

I think establishing an electronic back-up system is just the first step in saving our work for the long-term. For the stuff we really treasure—and want to be treasured—we need to create a system to insure its survival. I know none of us really want to deal with having more paper around, but that might be one way to save it.

I’m not sure what the answer is, but I think it’s a topic that needs our attention. Wouldn’t that be like a pie in the face if everything we did digitally suddenly just disappeared?

What steps do you take to ensure the long term survival of your work?