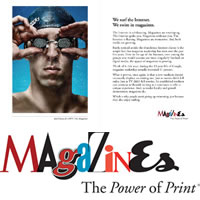 As writers we are all very aware of what goes on in the publishing industry.

So no doubt you’ve seen or heard of the large and ubiquitous national ad campaign, announced in April by a joint venture between five giants of the publishing industry (Condé Nast, Hearst Magazines, Meredith Corporation, Time Inc., and Wenner Media) titled “Magazines – The Power of Print“.

What? You haven’t spotted it? It’s in the May issues of over 100 major magazines spanning many different genres.

You are still reading magazines, aren’t you?

I never leave my house without at least a couple of magazines tucked in my bag.

If you haven’t seen it, you’re not alone.

Earlier this month I was at the NATJA annual conference, and was surprised to hear from a number of writers I spoke with that they hadn’t seen it, many of whom told me they did not subscribe to magazines any longer – they get all their “news and information” online. A common refrain: why should they pay for what they can now get for free on the internet.

We may all be aware of what is going on in publishing, but how often do we realize that we can participate in – and possibly even influence or effect – what happens in our industry?

If you haven’t seen the campaign, allow me to summarize with a quote:

Yes, growing. The ad in one magazine goes on for several more paragraphs of positive industry trends, and other ads from the campaign feature similar inspirational messages.

Do you love your magazines? I do. I subscribe to dozens, mostly Travel (both those geared for travel consumers as well as travel industry professionals for a different perspective on related topics) and several for writers and editors (I literally get breathless with excitement when my issue of Writer’s Digest comes in each month).

I never leave my house without at least a couple of magazines tucked in my bag, for those you-never-know-when moments of spare time, to peruse an article or two. I am always dog-earing the corner of articles I want to re-read, or sometimes pulling them out to scan and email to someone else. Some magazines I keep in my own personal archive for future reference. And YES I even love the ads, and often find great new products to try out by paying attention to them. 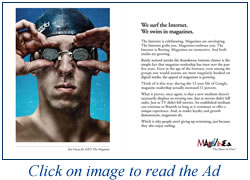 So my point is this: If you love magazines – and if you want a future that includes the possibility of publishing your work in them – you should be supporting that medium.

Yes, both the Internet and magazines educate us, entertain us, inform us, and inspire us, but magazines are also what we – as writers – are proud to (or aspire to) see our own byline in.

Sure, subscribing saves you money over the newsstand/bookstore prices (a nice bonus), but it also allows publishers to set ad rates, which we all know is what keeps the magazines alive.

So the next time you’re browsing a magazine rack for something new to read, think about subscribing – you’ll get a whole year of immersion for barely more than the cost of a couple of issues at that newsstand.

The ad I quote above ends with these words: “….people aren’t giving up swimming, just because they also enjoy surfing.”

We are those people, and I love to swim.

Do you still read and subscribe to magazines? Which ones?