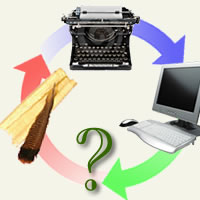 I’ve just come back from a trip to Botswana and Zambia, where I was on a safari.

One of the outings we took involved a boat trip through the waterways of the Okavango Delta which, in parts, are lined with thick stands of papyrus.

At one point, our guide buzzed up close to the weeds and pulled up a stalk of papyrus. He showed us how one can make braided bracelets with it and also explained how the Egyptians flattened it to write on.

I couldn’t help but wonder, how could they possibly have figured out that you could actually write on the innards of this tall and skinny river weed ? I suppose back then, it was the equivalent of writing on a napkin in a restaurant. When you’re desperate, you’ll find some way to get your point across.

Our objectives are the same as our predecessors back on the plains of Africa and on the banks of the Nile. We want to share our travel experiences

I’ve always maintained that travel writing was among the first, if not the very first, type of writing.

On this very same African continent, you can see 3,000-year-old rock art depicting scenes from wanderings through the bush.

The paintings show day-to-day life, animals that might have been seen, battles and festivals, and tales of hunting and food gathering. In essence, individuals would travel, return home and share their road stories on the cave walls, using natural berry dyes.

Fast-forward to the 5th century BC, and you find one of the world’s greatest travel tales –The Odyssey-which was originally written on scrolls of papyrus. Many years later, in the mid 1400s, Gutenberg invented the printing press, providing a revolutionary tool of expression for all sorts of travel writers from Margery Kempe who chronicled her experiences of visiting holy sites in Europe in the 15th century to many of us today who write travel books and articles for all sorts of publications. 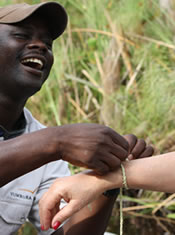 A river guide at Vumbura Plains safari camp in Botswana ties a bracelet he made out of papyrus onto a young woman’s wrist
Photo Credit: Susan Farewell

And now, with books becoming electronic and magazines and newspapers folding by the day, it looks like Gutenberg’s run is coming to an end. Not bad, some 600 years.

At the same time, that leaves many of us trying to reinvent ourselves and tell our travel stories on the world wide web. Our objectives are the same as our predecessors back on the plains of Africa and on the banks of the Nile. We want to share our travel experiences.

So now, we all blog, we tweet, we write status updates and upload photographs and videos. Our travel stories come to life on screens around the world as we all scramble to find–and keep–our own audiences.

I suppose it won’t be long before some tour guide holds up a book to show travelers that that…yes…people actually used to have their stories printed in these. Perhaps he’ll show them how they can use books as hats, umbrellas, door jambs.

Having grown up on books, I suppose one might feel a certain melancholy over this. Not me. I’m okay with it. Because in the end, I know that what we travel writers have is ours to keep. We know how to travel and tell a story.

So whether it’s on a cave wall, papyrus, in a book, or in cyberspace, we’ve got our own little missions in life.

Where do you think the future of travel writing will take us? Share your opinion!