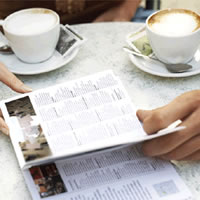 Writing guidebooks is a dream of many travel writers, but if publishers aren’t knocking on your door begging you to write one for them, write your own and self-publish it.

That’s what I did.

My first mini-guide grew out of an article I was writing for a newspaper travel section in 1996. They wanted 750 words on what to see in Beijing. Impossible! I’d just returned from working in Beijing for a year, and knew it would take many thousands of words to do justice to the city. So I kept on writing and ended up with a booklet called “17 Really neat things to see and do in Beijing and other good stuff I learned the hard way“.

I designed it in MS Publisher and photocopied it at an office supply store. Primitive, yes, but, hey! this is how Rick Steves got his start. I set up a simple web page to sell it in the year I was back in the United States.

I went back to Beijing for another year of working as a copy editor at China Daily. When I came home, I revised and greatly expanded my booklet, renaming it “Do-it-yourself Beijing“. I sold about 500 copies of the guidebooks, which is remarkable since the only place they were available was my website. I didn’t take credit cards and checks had to clear before I would ship the book. Along the way I got a couple of nibbles from guidebook publishers, but I didn’t want to give up control over my “baby,” and, by the time I did, the information was outdated.

Fast forward to 2009. Demanding jobs and a new marriage kept me from writing more books during these years, but I still kept going back to China. When I retired last year, I decided to revamp my Beijing guidebook. Technology has changed a lot in the intervening years, and my new “DIY Beijing: A guide for the independent traveler” is positively upscale compared to my early efforts. It’s still self-published, but I’ve chosen to do it through GuideGecko.com, a Singapore-based company which specializes in traditional and self-published travel guides. It’s available as both printed and e-books. I figure I’ll make about the same amount of money as on my earlier guides but with a lot less hassle. No more photocopying trips to the office supply store, no more mailing envelopes to buy, no more trips to the post office to mail the guides, and they take credit cards! I also published “Parents guide to Beijing: A kid friendly city” and “Cuandixia: An ancient mountain village in China” with them this summer. All three books are selling.

My guides are highly opinionated – they’re what I like or don’t like about places in Beijing. That’s why I call them Cheryl’s Guides. I specialize in off-the-beaten-path locations, but don’t include every one, only those I like. Historical background depends on how much an attraction fascinates me. Over the years readers have told me they like this type of guidebook, that they’ve found useful information in it that wasn’t contained in their mainstream guides.

My marketing efforts stress my guides are not a replacement for mainstream guides – I don’t include hotel or restaurant recommendations and other stuff like that. Yes, I have to do the marketing for the books, but I would have had to do that anyway. I target my books mainly to independent travelers to Beijing, but also stress they’re great for people on guided tours who want to break away for a few hours.

Self-publishing works for me, and it can for other travel writers, too.

Cheryl Probst is an award-winning photojournalist who spent more than 25 years working for newspapers in Oregon, Washington, Alaska, New York and China.

She retired from her job at a local law firm last year to concentrate on freelance writing, and now writes mainly about travel in China and the Pacific Northwest, as well as about motorcycles (she’s married to a motorcycle fanatic).

She has also created her own guidebook line, Cheryl’s Guides, to cover all the travel areas she wants to write about. Books about local wineries and motorcycle museums are on the drawing board.

Cheryl and her husband, Jon Teal, live in Washington State.