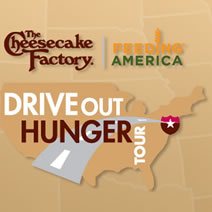 The Cheesecake Factory (yes, the restaurant with the yummy food and to-die-for desserts) is partnering with Feeding America for what they are calling the “Drive Out Hunger Tour“.

September is “Stamp Out Hunger” month, and what The Cheesecake Factory is doing is a Road Trip to help the less fortunate among us. They’ll be touring 30 cities to raise awareness and collect soup for local food banks. All they are asking is that you stop by with two cans of soup to donate. If you’re one of the lucky first 500 to donate, you’ll get a complimentary slice of Stefanie’s Ultimate Red Velvet Cake Cheesecake™ but even if you aren’t, you’ll feel better knowing you helped someone else to avoid going to bed hungry.

Did you know that every year roughly 25 million Americans face hunger, including more than 9 million children and nearly 3 million seniors?

Don’t worry if you’re not in (or near) one of the 30 cities they’ll be visiting – just stop into your local Cheesecake Factory on September 30th and bring two cans of soup with you for your local food bank – they’ll donate 10% of your check along with your soup. How cool is that!?!

I’m a big believer in supporting local food banks throughout the year, not just around the holidays, so it’s really nice to see such a large corporation getting involved in such a big way, and with an ongoing commitment. Bravo to The Cheesecake Factory – I wish you a very successful Road Trip!

Share your thoughts on companies who lend a helping hand!