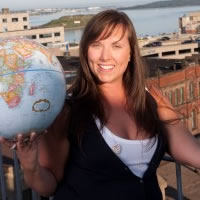 The Royal Holiday extends their sincere apologies for the technical difficulties that caused sporadic outages at their website, and thanks to all those travel writers that were able to successfully persevere to find the answers to the questions (required for entry).

Of the several hundred qualified entries received from travel writers all over the globe, Cailin’s name was randomly chosen using a Bingo system. All of the names were entered into a bingo grid on my computer, and one letter/number combination was chosen (by my mailman, who happened to knock on the door just as I was looking for someone to draw a number, and who is a really good sport). I thought about yelling out “Bingo!”, but it’s just not as funny when the only other person around isn’t in on the joke.

Cailin is a travel writer who also works in the film industry, and she is currently involved in producing and starring in a travel show called “Travel Yourself”, which is about just that, travelling by yourself. You can learn more about Cailin, her travel writing, and her show at http://www.travelyourself.ca, or you can become a Fan at her Facebook Page, or Follow Cailin on Twitter!